Last summer, in the middle of a nice day, out of the blue, my son startled us all by suddenly saying "Kittens!" as he was looking out the window to the front yard. Sure enough, there was a litter of kittens living under a pile of old lumber. They must have been born there, and now that they were old enough to venture out on their own, we became aware of them.

They were adorable. We took blurry pictures, of kittens walking the plank, and kittens under a tree, and kittens with Mom. One looked just like my cat, who was an indoor cat, so we joked it must be my cat's baby (not possible). 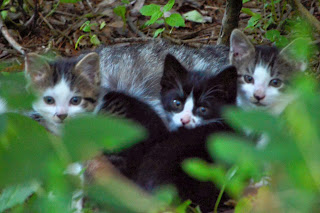 We thought it would be a great idea to catch and tame the kittens, and find them homes.
We talked to the shelter about their "spay and release" program for feral cats.
We had several different ideas of plans for these kittens.

And then they disappeared.

The Mom had apparently been injured (we saw her limping), and at one point, we saw her with the kittens in a different part of the yard, but after that… nothing. They must have been "on their way out."

We don't know what happened to them.
There are plenty of wild critters around here that eat kittens. It is the usual assumed end of lost house pets, but we really have no way of knowing.

Fast forward through the Winter, and into Spring, and then to Summer.

Lo and behold, in August, and I don't remember how we discovered them, we suddenly had kittens again. This time, in our garage, way in the back, in a totally inaccessible place. Two of them. Totally adorable. There was a totally different Mom cat, one we had never seen. 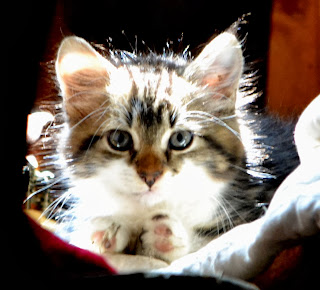 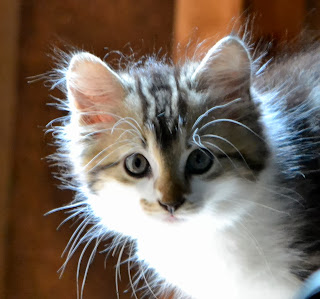 This time, we were determined to take action.
We talked to the shelter again.
Found out that my brother has a live trap we could borrow.

The trouble is… they were living in a part of the garage we can't get to, and there was nowhere to PUT a trap that we could count on.

So we started feeding the kittens. We didn't know how readily they would take to eating cat food, but it was no problem at all. Before long, we had Mamacat and two kittens eating food we left for them.

Not long after that… Mamacat and one kitten.  :-(  One had disappeared.

Mama and baby made regular appearances, though.
They learned quickly to associate our appearance with food.
We would leave them food when we left the house, so they learned that if humans came out the door and got in the car… look for food.

The original plan was to get them used to coming for food, then use it to bait a trap, catch them, get them spayed, bring them back to the garage.

Actually, that was Plan B.
Plan A was to catch the kittens when they were young enough to be tamed… but that didn't happen. We missed the "window" of 6-8 weeks old that is typically considered the best time for taming.

So Plan B.
Feed them. Catch them. Take them to get spayed and vetted, rabies shots, tested for various diseases, then let them live in our garage.

For one thing, I realized that they were building trust, and that if we trapped them and hauled them off to the vet, where they had surgery, etc, they'd be TERRIFIED, and likely not be willing to trust us after that. What a nasty trick, to lure them in, get them to trust us, and then… a terrifying experience, complete with cutting and pain and all.

I didn't feel good about that idea, at all.
Strange, feral cats I had no connection to? Sure. No "betrayal" there.
It isn't that I think getting them spayed is a bad thing… it was the whole "trick them into getting trapped" thing that bothered me.

So we kept feeding them.
Days went by.
Weeks.
Seasons changed.
We hear the coyotes howling at night.
There have been bobcat sightings.

And we were, by the minute, getting more and more attached to this kitten.
We named her, by accident. Cutie.  Something we'd never intentionally name a cat!!

We feed her twice a day, and talk to her every time we go outside.
She talks to us, too.
Insistently.
"Where's my food, humans?!?"

She's a smart little thing. Ever vigilant.
Notices any change in routine, or habit, and is suspicious. Wary. Hesitant.
She watches us.

Slowly, over time (it has now been three months), she has gotten more trusting.

At first, she'd stay at a distance, watching, and then when we put food out, once we got in the car, she'd come eat.
Then, she'd wait from not-as-far-away.
Then she'd start eating before we got into the car- but only once we started walking away from the food.
It turned into a race- can I make it to the car before she gets to the food?  Nope.
Then she started being willing to eat before we walked away. She'd allow us to be about six feet away.
Then four. Or three. 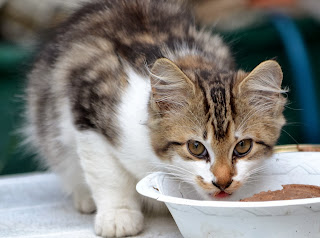 During this whole time, we never made any movement towards her. Never made any attempt to get closer, or to touch her.
We just waited. Still. No pressure.

Recently, she has gotten more confident.
A big noticeable change was that she started coming towards us, while we were carrying food to where we put it in a bowl for her.
We come out the door, and she hears us, starts meowing, and runs towards us, rather than away.
Not TOO close, but close enough to then turn around, and run back to the food ahead of us. She would get to her spot at the front of the garage, and keep meowing while we put food in the bowl. Leading us there, as if to say "hurry, hurry! I'm hungry!" 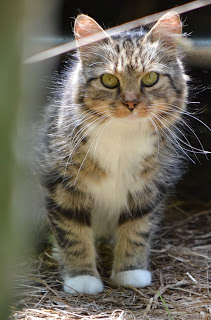 Mama cat… not so thrilled with us. Doesn't come towards us, doesn't eat if we are still there.
She stays off to the side, waiting until we are gone, when she will then join her kitten. We're pretty sure she is telling the kitten to be more careful, wary of those humans. I suspect she has a reason not to trust people- how did she get here in the first place? She was probably dumped when she was pregnant, as often happens in rural areas. It's probably where the Mom from last year came from, since she had NOT been a stray in the area before we saw her with her kittens.

When the weather started getting MUCH colder- winter is coming!- we got worried about little Cutie. She would shiver while eating, poor thing. We chose to close the garage door, leaving it open at the bottom just enough for a cat ( but NOT a coyote!), and she was okay with that right away, sticking her adorable little head under the door to watch us. We started warming up the food. We sometimes feed her IN the garage, rather than in front of it, and stay a while, talking to her, while she eats. We made a little "cat cave," thinking she might like a smaller, more confined (and therefore warmer) space, but there is no evidence that she has decided to sleep there.

And then something else changed.
My daughter, coming inside after hanging out in the garage, told me she thought that she heard Cutie purr for the first time.
Huh.

We did something that we saw recommended online, for taming feral cats- we took our indoor cats out, in arms, so she could see that cats are happy with us holding them.
The indoor cats were VERY curious about this loud-mouthed kitten, and she was curious about them. All to the good.

I didn't move.
Didn't want to alarm her and set us back any.

Later that same day, after my daughter went out to feed the kitten, she came back inside absolutely thrilled, and practically yelled "Cutie let me pet her!!!"

What happened was this:
Cutie was on the porch as she has been for the past few days, running alongside, leading the human to the food place.
My daughter had the same experience I had had in the morning: kitten in a hurry, jumping up to get the food before it was all in the bowl.

And then.
What we have been waiting for happened.
The kitten rubbed her head on my daughter's hand.
Cat language for "you're okay."
After the head-on-hand rub, she settled to eat, facing away from my daughter, for the first time- every other time, she wanted to keep her eye on the humans, but this time, she relaxed.
My daughter cautiously touched the kitten, and with no alarm response, was able to pet her back. Several times.
Then she chose to back away, letting the kitten be, not risking ANY negative reaction.

And came inside, over the moon.

This has been a long story.

But if we had, my daughter would never have had this experience, of having a wild animal CHOOSE to trust her.
There is nothing else like it in the world- trust earned and freely given.

And that was when we realized that this entire experience mirrors our unschooling so perfectly.

We hadn't thought about it before, it was just who we are and how we treat others, even little wild kittens.
It was only because I had been spending so much time lately online, trying to communicate with people about the difference between a relationship without force, without making rules to prohibit things, working together to not need "rules," that I realized THIS was what I meant.

Trust, earned, and freely given.
Patience.
Looking at the long view.
Slowly establishing that you CAN be trusted, and never wavering. No pushing to get what you want. NO hurry. No making anyone do anything.

I'm absolutely confident that one of these days, we're going to open the front door, Cutie will be right there waiting- and will walk inside. Into the warmth, love and safety that will never be a trap. 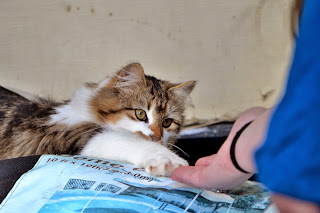 What's Up With Another Blog?

Here I am, starting a new blog. Why on earth would I do that, when I already write or contribute to several other blogs?
It's simple.
I'm complex.
I have a wide variety of things I'm interested in, or that I do, and while I see that they are all connected, other people- people who might read my blog- may not be so interested in all of the different parts of me.
I've decided it's about time I start a blog that is primarily about learning, about wondering, about wanting to know. We've been unschoolers since before my kids were born, really. I've participated in a variety of online unschooling forums ever since there have been any.
My kids are grown now. It doesn't mean that anything has changed, as far as how we learn things around here, but it does mean I won't have many little kid stories. And really, I intend to write about my OWN learning experiences, rather than theirs. I can only guess at theirs, from how it looks from the outside. Mine, I can share from the inside.

Learn More, From Other Folks: