I’m taking a break from other things to write this post because I want to share something that I think is important. It’s a long read, so bear with me. And it isn’t about little kids, or written for them. It’s for you.

Learning is an interesting subject. Sometimes, it’s possible to “know” something, in a way, for a very long time, yet not REALLY know it, at all, until something brings it to your attention in a way you can't ignore. This is especially true of unpleasant things, since there can be a strong impulse to ignore them or discount them, or otherwise not have to consider them.

I recently started researching my family’s history.
My daughter and I did DNA tests, because we wanted some of the medical information, and I didn’t expect to get so caught up in the genealogy part.

I’ve connected with several extended relatives, which is delightful.
And I’ve learned a LOT about my family.

We have quite a variety of stories.

To start with, I can trace my relationship to George Washington- and to the Queen of England. I find that funny.

I’ve known for a long time that the actual person that the story of Dr Jekyll and Mr Hyde was based on is one of my extended relatives.

There’s a story of one family where most of them were captured by Indians. Some were killed, some held captive and released later.

There’s a man who was a highly respected furniture maker, who made furnishings for royalty, some of which is now in museums around the world.

There’s a story about one family where one of the sons went off to fight on the side of the Union in the Civil War, and the rest of his family was run out of town on a rail.

There’s one son who was found guilty of stealing his father’s money.

More than one story of parents dying young and children being sent to live with other relatives.

There are, that I know of so far, at least two murder victims.

At least two men who were at Valley Forge (incuding one who was a surgeon and cousin of George Washington).

There is a wide variety of professions, too. Lawyers, doctors, cabinetmakers, oil field workers, farmers, soldiers, and more that I haven't even gotten to.

There are SO many interesting things about all of this.

For one, it has made me much more interested in history, in general. Where was my family, what were they doing, and what role did they play in various historical events? All I knew of my family before was that both of my parents came from farm families, and my paternal grandfather was also a carpenter. Now, I can trace my family back to the Vikings. No joke.  It is AMAZING to learn about some specific historical people and know that I carry some of the same genetic material. How cool is that?

It isn’t always easy to figure these things out, though.
One line of my family has several errors in the publicly, commonly accepted, genealogical line.
I found one error fairly early on, and did the research to correct it. The first clue was finding that according to the accepted version, my great grandfather was born when his father was 57 and his mother had already been dead for nine years. I suspected right away that it must be an error.
The other one, that I’m currently researching, involves a family where five of the kids were born before their "mother” was ten years old. That, and some generations where the same names are repeated, making things very confusing. I think I have it figured out, but don’t have all the documented proof yet.

Which brings me to the next part.

For starters, there are multiple geneaology websites, and they are GREAT…. except they are not always accurate. People can post whatever they believe to be true, without any actual evidence. At least one website asks that people cite their sources, but it’s not required.

Beyond that, there are several places to go for information, and one of the most useful is to look things up in the US Census (assuming you are looking in the US, during years in which the census records are available). These are somewhat more accurate, but not foolproof. For a long time, they were compiled by someone going door to door and writing down what they thought they heard, with no particular attention paid to spelling or accuracy. You have to look at various potential spellings, and be willing to assume the birth years may be off. Sometimes, they may list a person’s relationship to the head of the household incorrectly, too, because they didn’t understand what the person was trying to explain to them, or just didn’t want to bother. Handwriting was not always easy to decipher. Some of the older documents are faded and difficult to read.  The 1890 census records were largely destroyed by fire, so are no longer available, and getting past that gap can be very challenging. Even so, looking for things in the Census is a good place to start.

In addition to the census, there are many other historical documents that are available to be searched, thanks to the LDS church’s focus on genealogy. There’s a website where you can put in your ancestor’s name, and it will give you results of that name in MANY types of documents. Births, deaths, marriages, etc. These are GREAT to find, and very helpful, and are often the only way to prove some of the connections of women, who changed their name when they married.

In my attempts to untangle the knot in one of my lines, I started searching that website for any help I could find.
And I found some interesting things.

In it, you can see the name of the head of the household, their wife if they have one, and the names and ages of their children. You’ll see their profession, and often, where they were born. These pieces of information can be very helpful in matching up families over the years.

This time, I included the information across the tops of the columns, so you can see the variety of questions asked.

"The name of every person whose usual place of abode on the first of June 1860, was in this family.”
Description: Age, sex, and color (white, black, or mulatto)
Profession, Occupation, or Trade of each person, male and female, over 15 years of age.
Value of Estate Owned (value of real estate, value of personal estate)
Place of Birth, Naming the State, Territory, or Country
Married within the year
Atttended school within the year
Persons over 20 years of age who cannot read and write
Whether deaf and dumb, blind, insane, idiotic, pauper, or convict.

That’s a lot of information.
And again, it is very useful- and fascinating.

As the years go by, the census questions change slightly, and eventually, they started being done through the mail, rather than by a person going door to door.
Some later versions list not only where the person was born, but where their parents were born, which is a gift to genealogists, for sure.

In other sections of the website, I was able to find marriage certificates for some ancestors, birth and christening records for some, and even Wills for some of them.

It is AMAZING how much historical information not only has been kept, but is relatively easily accessible.

But then something odd happened.

I was searching for an ancestor, and instead of getting results showing census listings or birth or death listings, I got a list that looked like this: 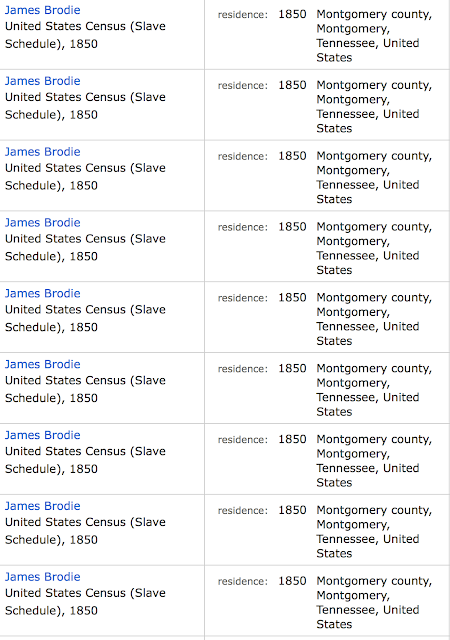 I was confused.
First, why are there so many identical listings?

And second, it says “United States Census” and then “(Slave Schedule).”  But what IS that?
And why is this person who might be an extended family member listed there?

Being a curious person, I clicked on one of the links.
And when I looked at the image of the original document, this is what I saw: 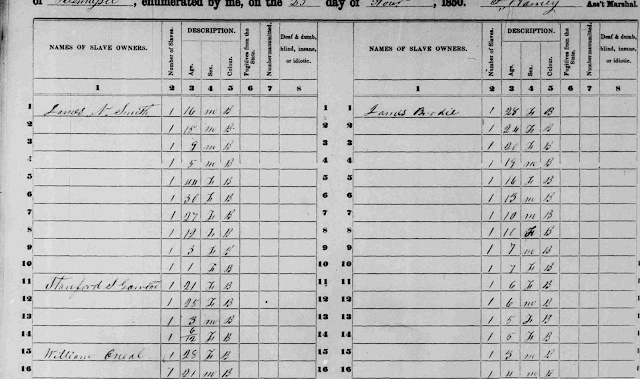 Really, really look at it.

Sit with it for a while.

I showed you the census listing of an extended member of my family.
The list of questions and wealth of information it provides.
And it was great.

Here is the "census listing" of someone else's family.

But I don’t know whose.
And neither do they.

We get this information:

Owner’s name
Description: age, sex, color.  (no qualifiers on the color this time)
Are they a fugitive?
Have they been freed?(no checks in that column that I can see).
Are they deaf and dumb, blind, insane, or idiotic.

There are lists of THOUSANDS OF PEOPLE who are listed ONLY by age and gender.

THEY HAVE NO NAMES.

I mean, they probably actually DO, but no one bothered to record them. Ages and sex. That’s all.

And for a minute, let’s go back to the 1860 census, so you can see what it actually says it is a census of.

Oh.
The United States Census WASN’T a listing of ALL people in the United States.
Only the Free people.
You know, the ones who matter.
The ones with names.

So the next time you hear the phrase “Black Lives Matter” and you have any questions about what that means, or if you want to insist "all lives matter,” I want you to come back (or go to the website yourself) and look at the PHYSICAL EVIDENCE of American History, and look at those lists side by side, and you tell me, according to that evidence, in this country, at that time, WHOSE LIVES MATTERED?

Is it any wonder that the descendants of the people who were listed like they were cattle still feel like they have some “catching up” to do? It’s not that long ago. During the lifetimes of my great great grandparents. People I can name. Just one generation older than ones I knew as a child.

I knew all this.
I really did.

But it hit me in a very visceral way to go right from all that fascinating information about my family, to… ages and sex. No names. No names. NO NAMES.

Is it any wonder that one of the cries in the fight against racism and unequal treatment is “Say his name! Say her name!”

This national wound is very, very deep, and very, very personal, and I don’t know a way to “fix” it.

But the least you can do is LOOK AT IT.
Let it sink in.

What's Up With Another Blog?

Here I am, starting a new blog. Why on earth would I do that, when I already write or contribute to several other blogs?
It's simple.
I'm complex.
I have a wide variety of things I'm interested in, or that I do, and while I see that they are all connected, other people- people who might read my blog- may not be so interested in all of the different parts of me.
I've decided it's about time I start a blog that is primarily about learning, about wondering, about wanting to know. We've been unschoolers since before my kids were born, really. I've participated in a variety of online unschooling forums ever since there have been any.
My kids are grown now. It doesn't mean that anything has changed, as far as how we learn things around here, but it does mean I won't have many little kid stories. And really, I intend to write about my OWN learning experiences, rather than theirs. I can only guess at theirs, from how it looks from the outside. Mine, I can share from the inside.

Learn More, From Other Folks: